KAZAAAAAAM! Hello! Now that my presence is known, I may start. It all started with a long
travel day – the start of many TTS adventures. As the road continued and brought our van along
with it, it started to sprinkle; privilege it is to see water in the desert. In an epic turn of events, the
sprinkle froze and dropped little ice balls (hail) onto the vast, rust-colored land. Many oohs and
ahhs escaped our mouths. The only word in our vocabulary to describe it, in my opinion, is
magic. Pure magic. Eventually the ice returned to rain and we arrived in the small town of Loa. It
was one of those small towns that felt like a small whisper could spread across like wildfire. We
made a stop at the brick post office and the local family dollar (the birthplace of the my little pony
coloring book). That is when we were given the green light to give Biz song requests, a rare
occurrence when she is the Dj. We have come to the conclusion that she has a playlist labeled
‘songs the kids can’t sing along to’. The rest of the drive went by with Brandie Carlile and
Lumminers singing along with us, almost just as loud.

We learned as we got to the sandy road that led up to the field station that Capitol Reef has high
chances of flash flooding. This posed quite the problem. First of all, we could get stuck on the
road (which has happened a few too many times to count) and second of all, if we left, the ger
van, formerly known as Vanessa, might not be able to find the road. Considerations we passed
among both students and teachers about the options. My personal idea was to write a letter in
the sand and if they found it, GREAT, and if they didn’t, they would eventually turn up. It was
turned down unfortunately. In the end, Biz and Becky decided to venture up the road and WE
MADE IT.

The field station was amazing, especially the kitchen. Oh my gosh I LOVED that kitchen. It had,
not 1, not 2, but 3 sinks! Our dorm names were Chinle and Moenkopi. Even though they were
identical, Chinle was obviously the better one (that’s the one I stayed in of course). The dining
and kitchen area was known as Kayenta. Chinle, moenkopi, and kayenta are all rock layers that
we could see from the view at the field station. Maylie and I were cook crew that night and we
made roasted sweet potatoes and butternut squash ravioli. I have been working on my spicy
food tolerance throughout the semester and I vividly remember coating my bowl with Cholula
and hoping for the best. I can’t begin to express how much it burned. I feel like my flushed face
and sweat did the job decently well. After dinner, we had study hall and went to bed. Early the
next morning, we were up for cook crew once again. Today’s breakfast consisted of pancakes. I
got into a lively debate with everyone about the best kind of maple syrup. In my vermont eyes,
there is only one maple syrup and no one can tell me otherwise. We went on a hike in the park
up to a truly magnificent lookout point and had lunch. On the way up, we stopped in a desert
hole and had a lit class. It was fire. Afterwards, we climbed to the point. We laid on our bellies,
very safely I may add, don’t fret my parental friends, and peered over the edge. We looked
down on the highway that ran through the park and the muddy river that flowed alongside the
road. It was really something. It made up for my soggy tomato and ham sandwich. In the
afternoon, we went back to the field station and had an afternoon of classes. We made some
really really good Thai food for dinner as well. The evening proceeded as normal, Study hall at 8
and bed checks at 9:45. 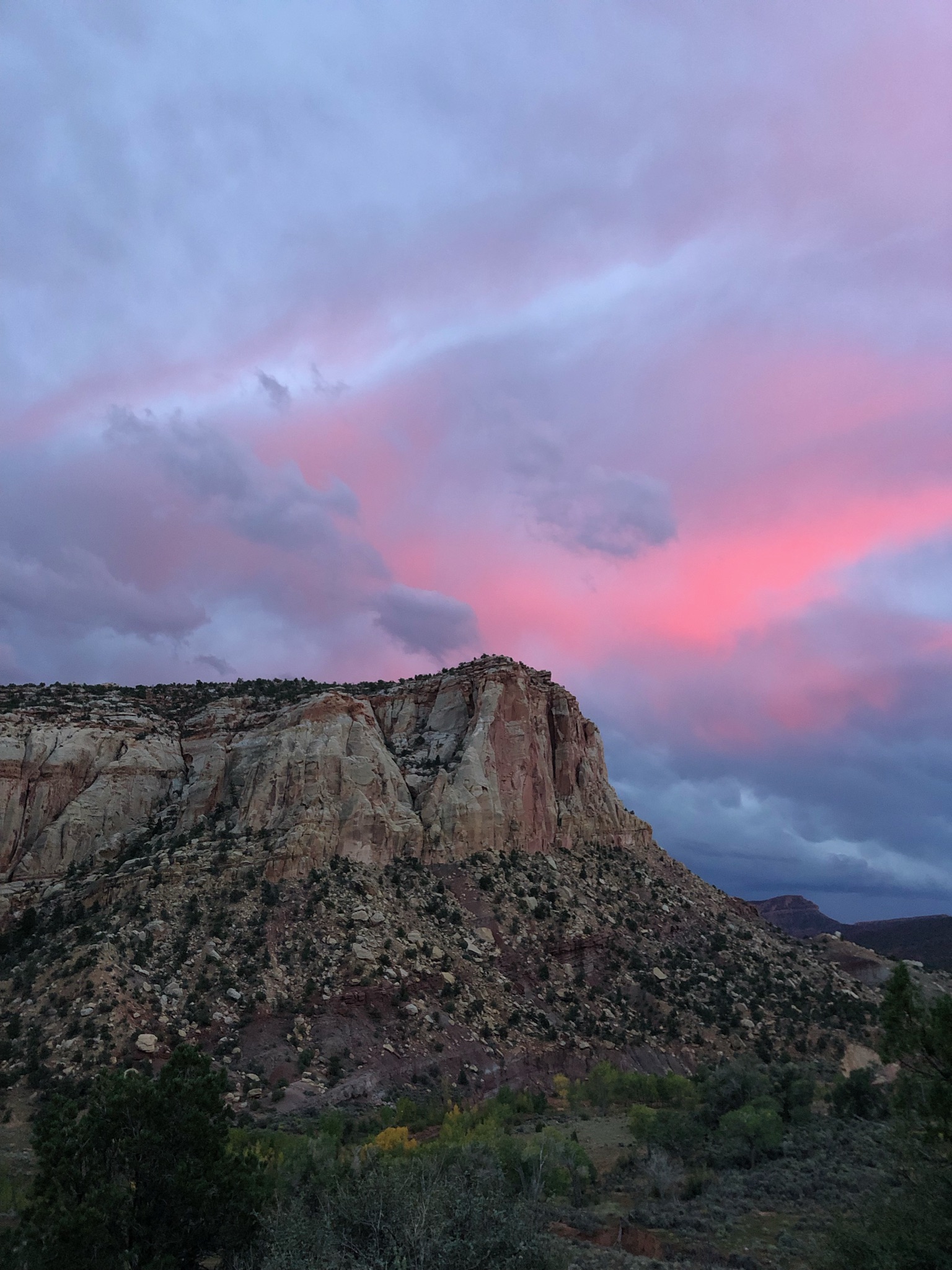 View from the field station on the first night.

The next day started early. There was optional yoga/workout time early in the morning. I will
admit it felt more impressive to actually get up and do it than it actually was. We had breakfast
at 8 and physical time started at 7. It was quite the push for Tess, Emma, Cora, and I to get up.
Well, actually, they were very ready. I, on the other hand, took a bit more encouragement. We/I
finally got up and started walking down the road. We followed the drainage down toward the
river and we watched the painting of animal paw prints that led us deeper and deeper into the
desert ecosystem. We turned around and followed our footsteps back up to Kayenta for
breakfast. Also! We had a really cool host named Michael! He lived at the field station with his
two kitties whose names were Winter and, hopefully if he took our advice, crypto. The second
one was named so we all brainstormed in a tornado of ideas and revelations. This was another
class day. We had classes in the learning center. The learning center was one of my favorite
places to be. It was an open room with a comfy couch and a basket of yoga mats. Cora would
like to mention that the acoustics were spectacular. “They reverberated the learning into the
back of my brain” -Cora. The evening, once again, consisted of dinner, study hall, and
sleepytime. 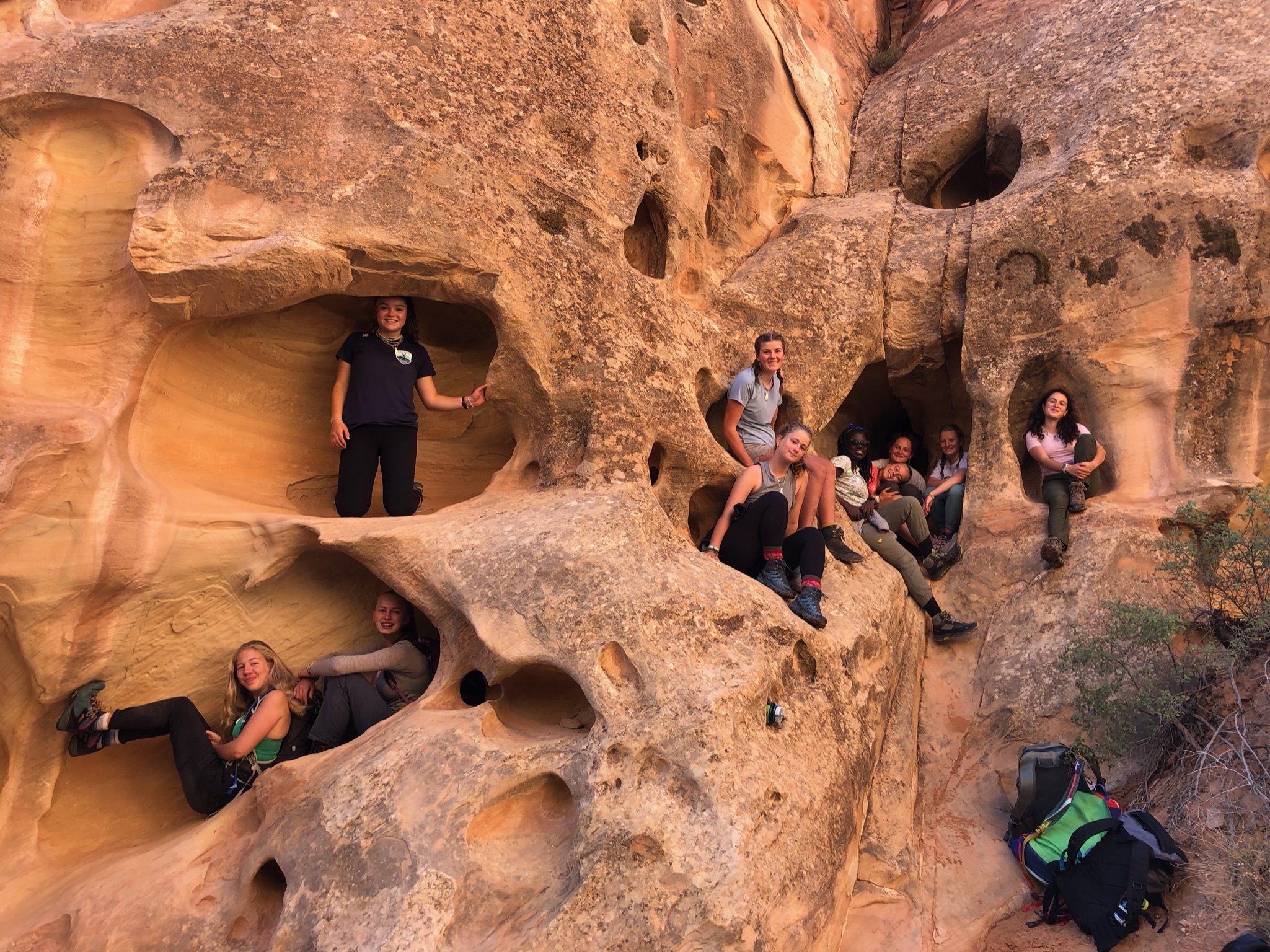 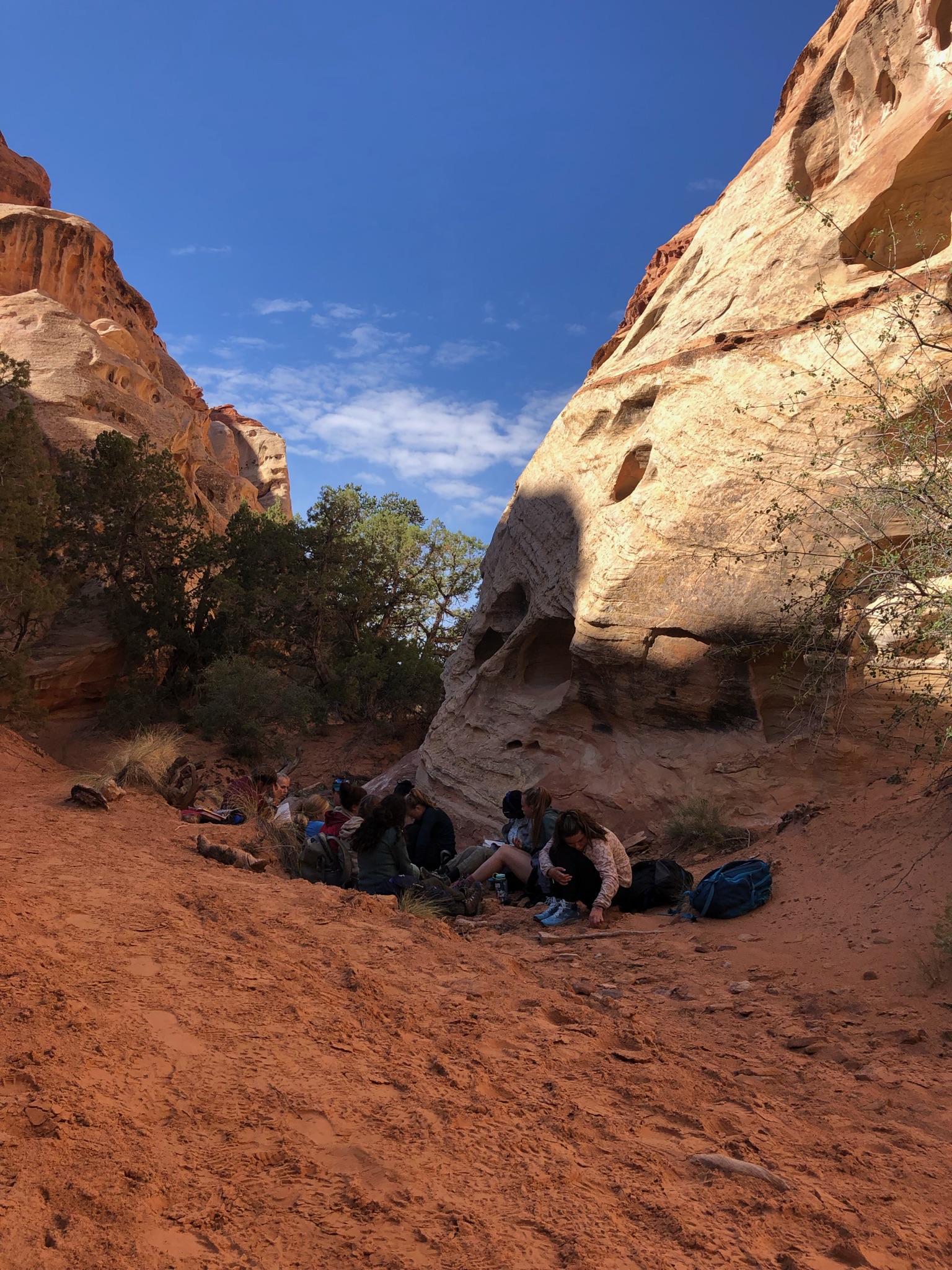 Literature class on the hike.

The day after was another class day but, in the evening, we had a poetry slam/ILife
class/star talk. This was one of my favorite evenings of the trip so far. We gathered together with
sleeping bags in the learning center and watched a video about how stuff is made on the
projector. We were all snuggled up on the couch and the coziest mush of people ever. Next, we
gather in a circle on the ground on the rug and read our poems we wrote to one another. There
are very few groups whom I would want to share a poem with but the community we have built
and the energy the space gave off was so welcoming that it was the perfect environment. Post
poetry slam we had a star talk with Michael. He brought out the telescope and told us stories
about the constellations and planets. My favorite part was seeing saturn. It really looked just like
a sticker placed on a bluish, blackish piece of paper. I loved it. It humbled my interpretation of
the significance humans play in our universe. I went to bed happy and full of thoughts. 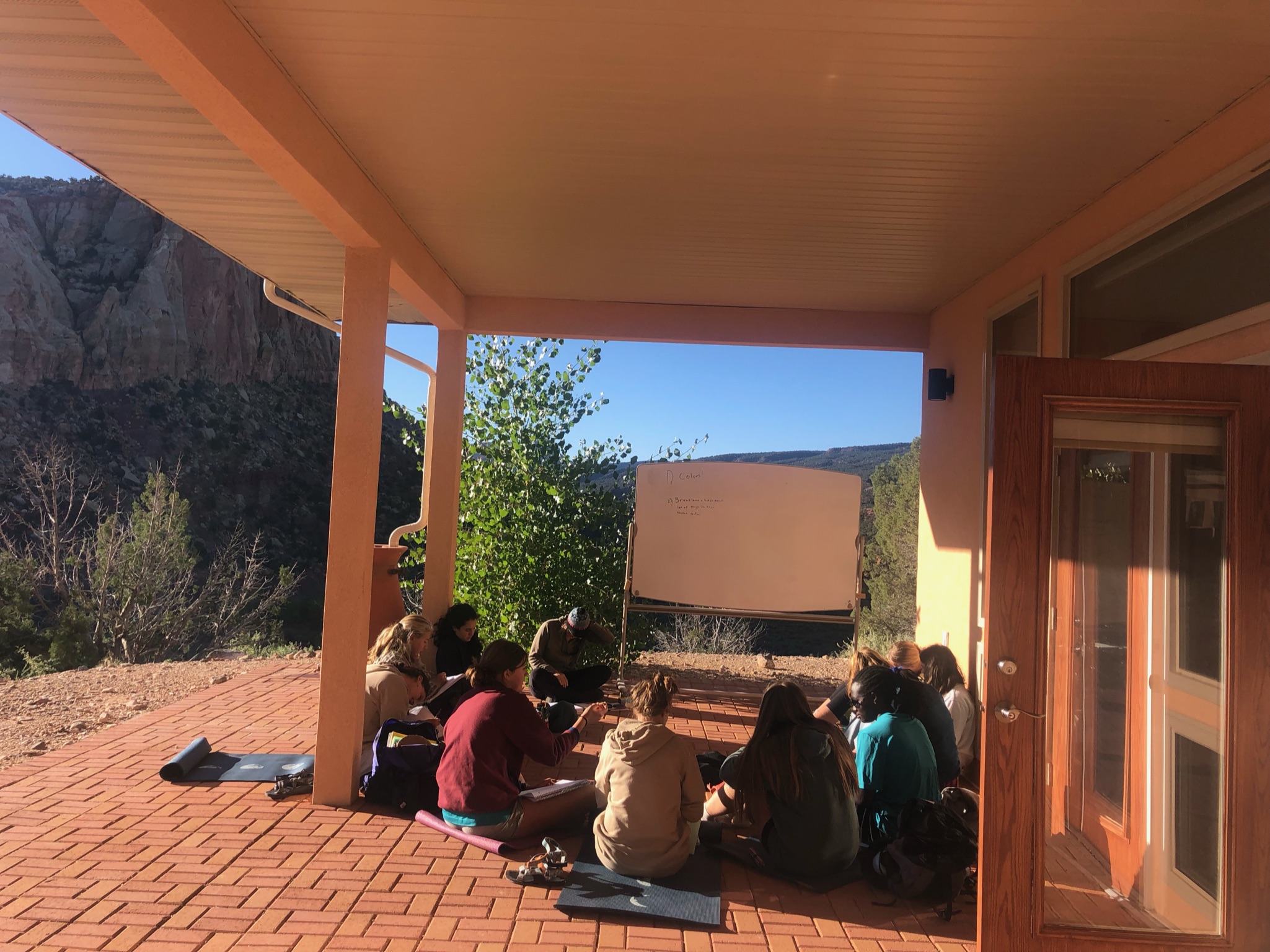 Science class outside of the learning center. 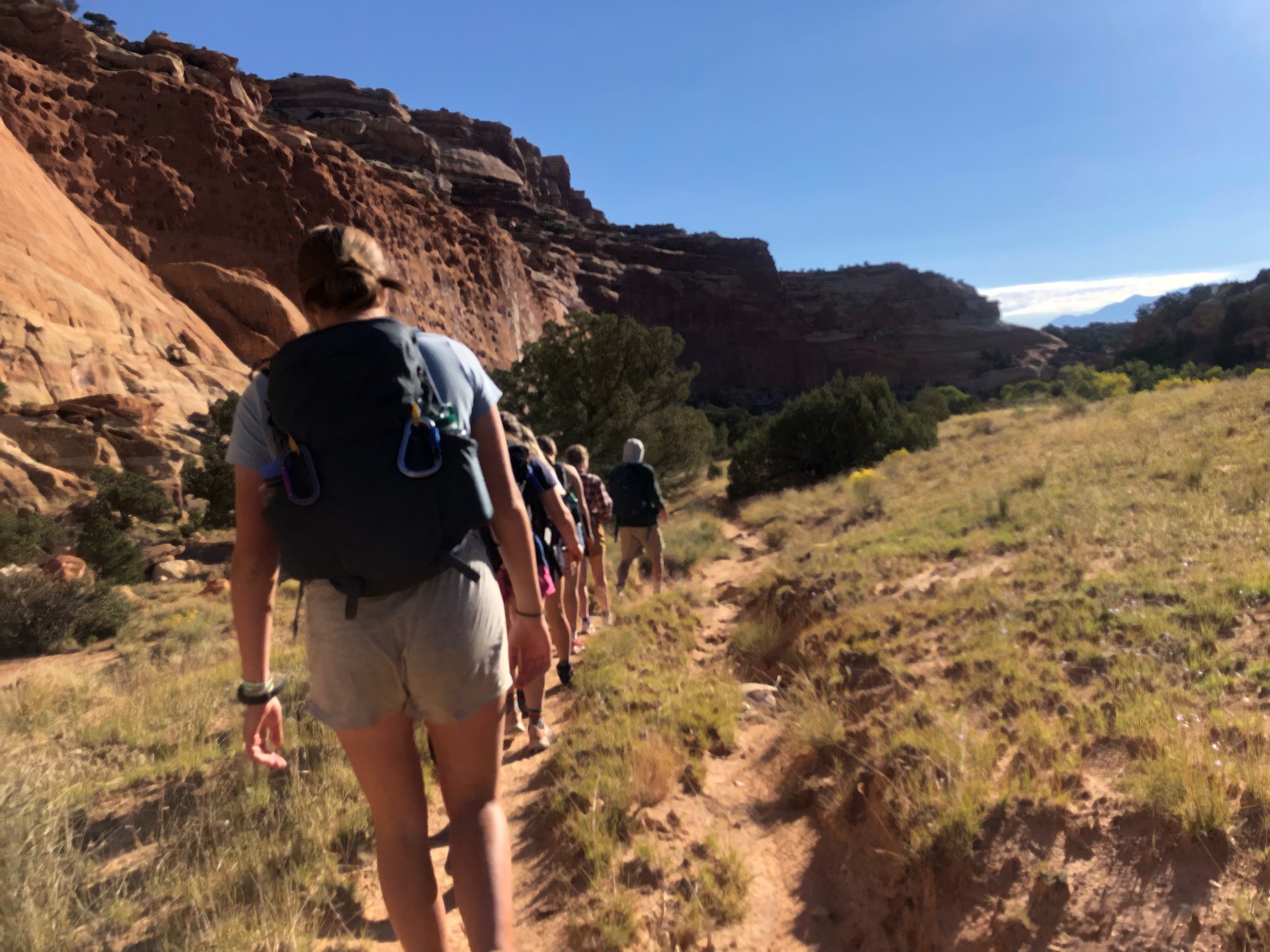 Hike before taking off!

This was our last day at the field station. A gloomy mood awoke us with the remembrance of the
fact we had to leave that day. We had so many happy memories wrapped up within the place
and it was a hard spot to travel away from. The playfulness and childlike sense of curiosity was
awakened in me. There was a trash and water use competition with all the groups that go
through the field station. I am proud to say that we placed 2nd in the total trash thrown away per
person per day. It’s quite the achievement. We also placed… *drum roll* … FIRST IN WATER
CONSUMPTION!!! We were all quite proud of ourselves. My commitment to not showering
made up for the fact that I smelled pretty darn bad. It was worth it. 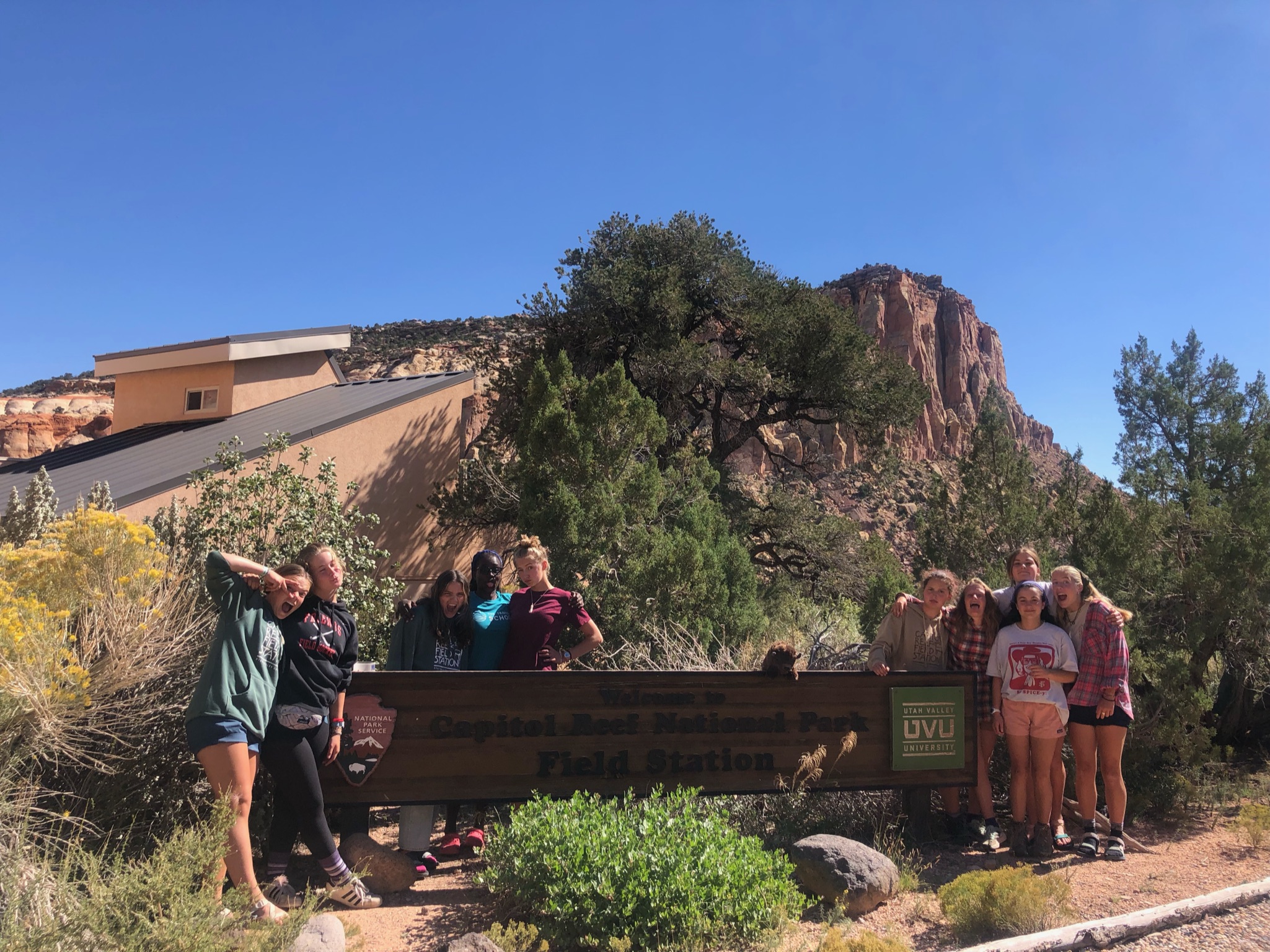