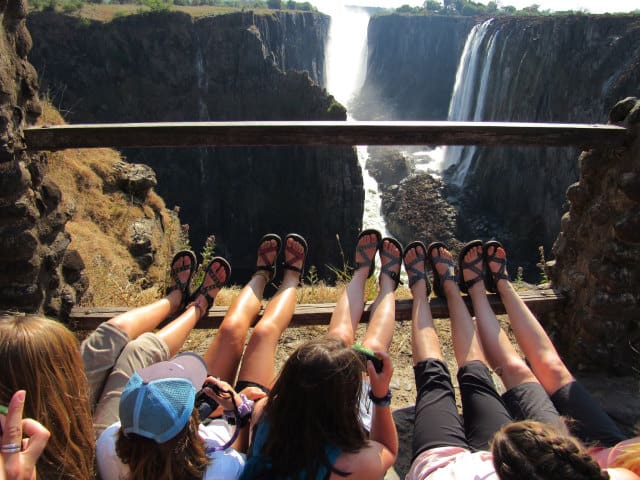 Last fall, participants in The Traveling School’s southern Africa semester had the opportunity to experience Zambia, Botswana, Namibia, and South Africa in an incredibly personal way. This group of students, and their bus, Big Blue, embarked on an academic adventure graced with the spray of the Zambezi River, friendships formed with members of a San village, and eyes that were continually opened to the human experience a world away.

The girls came home women, changed by the experiences they had and raving about their reignited passion for learning. To them, southern Africa was not just a place on the map, but a home they made over the course of their semester abroad. They compiled a list of their most memorable experiences in the three categories of cultural engagement, outdoor adventure, and academics to share with future Traveling School students heading to southern Africa this fall.

Outdoor Adventure: Rafting the Zambezi River
The mighty Zambezi River is located in Zambia and feeds into Victoria Falls, one of the world’s seven natural wonders and the largest w aterfall on Earth. This magnificent cascade straddles the border of Zambia and Zimbabwe where the falls crash into a deep canyon and leave flickering rainbows in its wake. The students didn’t just admire the view though. These learners who crave adventure had the opportunity to get their feet wet, and they did.

The young women waded into the Zambezi River, climbed into yellow rafts, and were guided toward the rapids. The pulse of the Zambezi’s strong current coursed beneath them as they forged ahead through the swirling foam of the river.

After tackling a fierce battle with the rapids and their own fear of the river’s power, one TTS30 alumnae commented, “Rafting through the rapids gave me a new understanding of self-confidence. I learned to go through difficult waters excited and comfortable with the idea of failing as I knew the worst it would end in was a quick swim.”

As the first class activity in Africa, the time on the Zambezi didn’t just give students a nice view or a rush of adrenaline. The time on the river built within them a trust in their own skills, the confidence to be fearless, and anticipation for the next three months with their new community.

Cultural Engagement: The Living Museum of the Ju/’Hoansi- San
The Living History Museum in Namibia gives a unique and interactive perspective into the lives of the indigenous San people. Run entirely by the Ju/’Hoansi tribe, The Living Museum focuses on presenting the traditional hunter-gatherer culture to travelers and the younger generations of their o wn tribe in order to preserve and celebrate the rituals of their original lifestyle.

During their fall semester our students visited this museum and engaged in a unique cultural experience. From traditional arts and crafts with the village women to learning ancient hunting techniques with the men, students were immersed in the daily culture of the San tribe. The day ended with songs and dance as the San tribe quickly turning from strangers to friends.

For some, the experience was awkward at first, a step out of their comfort zone, but soon students fell in love with these people. They shared laughs, stories, and songs around a campfire and soon the genuine experience of being human overtook the differences of unshared cultures.

“It was a moment where I thought, ‘Wow, humans are so much more united than we realize,’” alumna Emma shared, “I want to make connections like this the rest of my life.” The lessons taught in the bush of Namibia are ones students will carry for a lifetime and the friendships they built will inspire them to learn from people different from themselves.

Academics: A Broader Perspective
After a semester abroad, academics are not normally the first thing students want to discuss. However, returning Traveling School alumnae described their academic experiences as “life-changing” and “invigorating”. They cite their reignited passion for learning to the full immersion into their environm “To most people’s surprise,” one student reflected, “the classes are the first thing I want to talk about when asked about the trip. The intense cultural exposure and emphasis on seeing the real deal- not the tourist version was another strength. Whether it was speaking the local language, pushing yourself physically, or growing aware of the unintentional bias we all have.”

The influence of African leaders, such as Nelson Mandela, would hard to understand in a classroom, but within conversations during the students’ Cape Town homestays, these leaders came to life. The struggles of Africa’s indigenous people would have been lost in the pages of textbooks without the connection of shared stories and the opportunity to see the San lifestyle both past and present. News of endangered species would be drowned in a sea of headlines if our students hadn’t volunteered at the Cheetah Conservation Fund and seen, first-hand, the efforts of conservationists.

Soon, the students found that a classroom can only teach so much, but when the world becomes a classroom, learning is endless.

During their time in southern Africa, Traveling School students leaned into uncomfortable conversations and experiences. They stretched their comfort zones and confronted their own privileges, bias, and fears. They built connections with strangers different from them and had adventures many only dream of. The young women of the Traveling School camped under the southern stars and realized learning wasn’t just a classroom activity. For three months, they trekked through countries thousands of miles from their homes and visited places many only read about. Yet, when they returned they understood that the world was not as big as it seems and humans were not as different as we believe.