My name is Katherine Reid and I am writing to tell you a story. It’s not one you hear every day.

It’s the story of a 15 year old girl from Montana. She went to school and became numb to what she was learning, ideas were being shoved into her mind and she didn’t filter or question them. She kept doing this until she graduated – unhappy, uncultured and numb.

Heartbreaking right? Well that was almost me until I found The Traveling School. 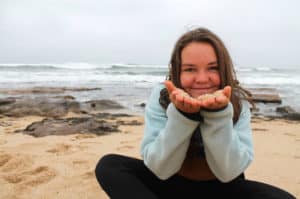 I knew girls who completed semesters in South America and they encouraged me to apply. I never felt the need until my administrator told me I would go nowhere. So as a rebellious teen girl of course my only option was to head off across the globe right? Sitting in my cold Yellowstone home I applied for the South America semester – vaguely explaining it to my unknowing mother.

A few weeks later I received a call with a warm voice on the other end, “Hi Kate, how would you feel about going to southern Africa instead?” At first I was hesitant, I had so many preconceived notions about this place and what it held. The stories my dad had told me from when he went there with the National Park Service startled me. Baboons on cars, hippos by the water, women selling necklaces on dusty roads. I pictured the oh, so common stereotype of Africa. An Acacia tree sitting on a grassy almost untouched except for the orange light from a sunset creeping over it.

I said yes and then began a whirlwind of paperwork, packing, unpacking, repacking again, raising money, awkward first emails to first time friends. Then the day came. I traded out my phone for my watch and my jean shorts for travel pants. I remember the moment everything finally clicked and I realized what I was doing. I handed an airport attendant my bag and they lifted it up into the overhead space. I sat down in a textured seat and clipped a belt. I then opened my journal, fresh and tidy white pages flashing at me. Out of the journal fell a piece of paper. I picked it up and turned it over. Smiling faces of my best friends in front of my local theater stared back at me. A caption read- “ WE LOVE YOU .” That is when it hit. I was leaving for three months, to go live with strangers, to go to places I didn’t research. I felt lost.

So much happened in those three and a half months. Not all of it was good – it was the hardest thing I went through. I cried every parent phone call, and laughed at every little inconvenience. There is so much I never thought I would do. So many places I would never have seen. I couldn’t even begin to fathom a year ago that I would be able to say phrases in Shona the native language of our “uncle” and “dad” from Zim. I could never dream of being followed by hippos down a winding river in two person canoes.

I always thought I had an imagination but until I saw the things I did, I had no idea what imagination was. Imagination saves us all. It provides us with a way out, with a dream. As Albert Einstein said “ logic will get you from A to Z, imagination will you get you everywhere.”

I haven’t been everywhere and I still have so much left to learn. But as of now I sit in my classroom at my new school. A new school that I always wanted to go to but never had enough courage to ask for until my TTS semester. I sit here at Park High in Livingston, MT and I dream of the past – rolling down a sand dune and I end up longing for a taste of Sudza, the smell of red dirt, and the feeling and dizzying freedom that TTS has provided me.

Of course I can feel this and I can incorporate it into my life. I have taken away confidence from my semester – the confidence to know that I am not alone even when I feel it.

I’ll finish with a story- on my last day of semester I was sitting on the porch of our rental house in Waterval Boven, South Africa. The air was humid and hung around us like mosquito netting and the smell of lemons wafted from the trees below. A loud rambunctious beat was coming from the kitchen and shadows danced across the floor. Shadows of girls who I spent every moment with – sleeping, eating, camping, weeping, all of it for – for the past three and half months. That is when I became scared that this world was too big for me to live without them. That my worth only lay in this community and that my talents would only be recognized here.

But if I learned one thing all semester it’s that you just need to take a deep breath and keep paddling down the Zambezi, keep running on the road in Livingstone, Zambia, keep hiking in the Tsitsikamma mountains, South Africa. And look ahead, you have a whole world out there. All you need are some traveling sisters with you in spirit, a good sturdy duffle bag, a place to call home even if just for a few days, and the dizzying freedom that you get from reading the world.

Thank you again for allowing me and many other young women to explore and change the world.